I promised you another post about the kitchen… and more bad photos. So I shall deliver.

In the theme we’ve been following lately of small changes making a huge difference, we replaced all the hardware on the kitchen cabinets. We ordered the new hardware when we ordered the new fridge and dishwasher back in November. At that time I installed one. Just one. And it was unsuccessful. I tried to put one of the canopy cup drawer pulls on, and discovered that the drilled hole was mere millimeters off, but I couldn’t stand the thought of putting the ugly old pull back on. So from November to February, we had a dangly drawer pull on our silverware drawer. You know, the drawer we use most often. Because that made sense. Ugh.
So one day we walked in the house after work and I was talking about possibly needing to get a whole new set of knobs and pulls that would fit. Andy said he wanted to take a look at them, and in minutes, still with his coat on, he had all of them replaced. Turns out it just took a little elbow grease to work them into place.
Here’s the hardware BEFORE. 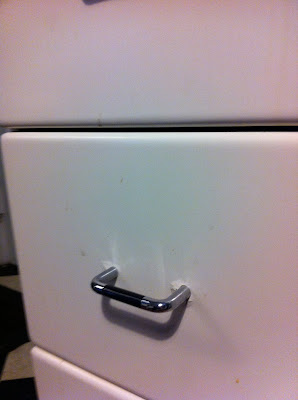 Yes, the cabinets are ugly. We know. Please ignore them. 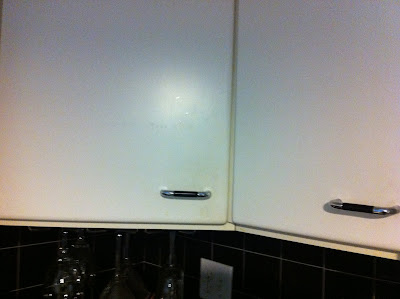 The hardware we had were black and chrome and looked very 1980s/early ’90s to me. Along with the old light fixture we replaced before, the kitchen just looked so incredibly dated. We chose “Bedford” in nickel by Martha Stewart for Home Depot (canopy cup pulls for the drawers and ribbons pulls for the doors), the modern traditional look that goes so well in our house. For less than $100 and an hour of total work, we changed the light fixture and hardware to update the kitchen by a good 20 years.
The new hardware AFTER. Yay! Happy Dance! 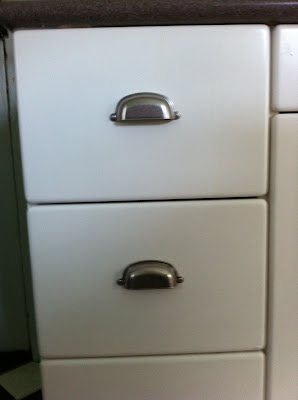 The cabinets are still ugly. But until we remodel the whole kitchen, it’s really nice to have some fresh, modern hardware. 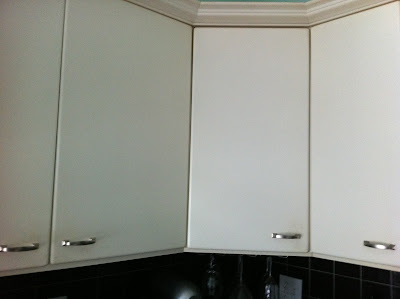