We made an interesting dinner the other day that I wanted to share with you: stuffing stuffed red onions. Who doesn’t love stuffing, right? This recipe is from the November issue of Martha Stewart Living as “sausage-stuffed red onions,” and we put our own (vegetarian) spin on it.

Ingredients
4 red onions
2 Tbs. butter
1/3 cup grated apple (1 apple — we used whatever kind we had at home)
2 cups of stuffing mix (we used the breadcrumbs + herbs/just add water kind)
1/2 cup of water or stock
1 cup of gruyere cheese (or more!)

Preheat the oven to 400 degrees

Cut off the top and bottom of a large red onion and scoop out the inside using a melon baller. This part was surprisingly easy and kind of fun. I scooped about half way to three quarters of the way down the onion. Definitely leave some onion at the bottom because we found that part was delicious. 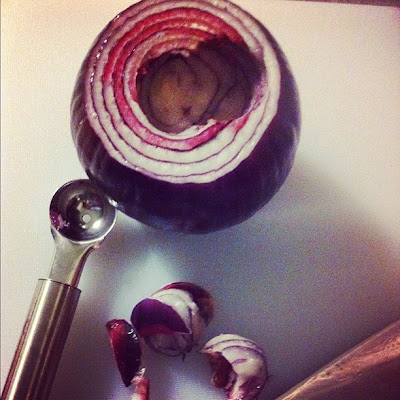 Wrap the onions in parchment and foil (we didn’t have parchment and they turned out ok with just the foil). Place them on a tray and cook for about an hour until they’re soft.
Meanwhile, start on the stuffing mixture. Grate an apple with a cheese grater. I wasn’t sure this would work, but we found that cutting the apple in half first made it easier. We left the skin on. Cook all the grated apple in a skillet in a tablespoon or two of butter for approximately two minutes. Turn off the heat and add the dried breadcrumbs to the apples along with water or stock and about 1/2 a cup of grated gruyere cheese. Mix it all together until the breadcrumbs are soft. (Follow the directions on your package of stuffing mix for how much water to use. Ours was 2 cups of stuffing and 1/2 cup of water. Add a little more water if it looks dry.) Set this aside and have a seat on the couch until the onions are done. 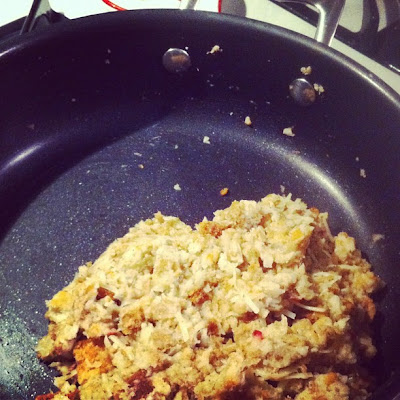 When the onions are done in the oven, scoop the stuffing/apple/cheese mixture into them until it’s level with the top of the onion. We really packed it in well since stuffing is yuummmy. 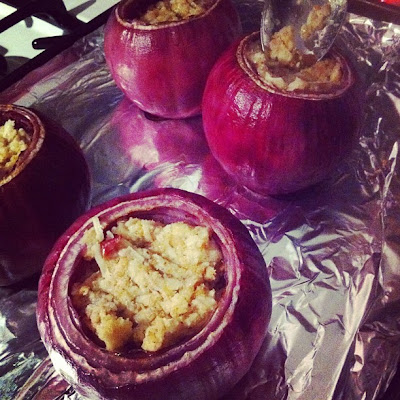 Put the rest of your grated cheese on top. I put as much cheese as I could fit on there, because I really love cheese! 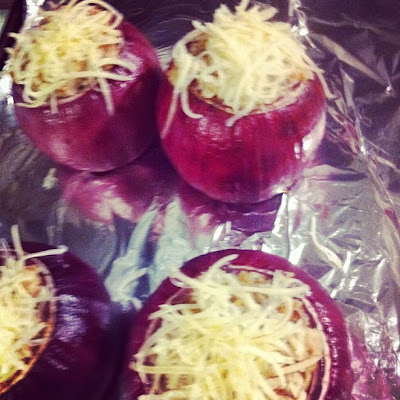 Put the onions back in the oven for another 20 minutes. We got a fun surprise when we took them out of the oven: the stuffing expanded and made what looks like onion popovers! 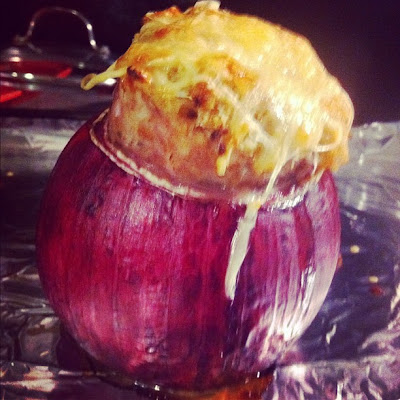 Andy and I had a lot of fun cooking up this little meal and it was pretty good too. The juices from the onion made the stuffing really moist and delicious, and the middle of the onion was super soft and buttery. The cheese on top got kinda crunchy and oh-so good. We did end up with quite a bit of onion left on our plates when we were done with the stuffing, so I’d recommend making a couple of onions per person to make a meal.
What do you think? Is this something you’d like to try? Let me know if you do and if you do it any differently!!
By Kerry | Filed under Eats & Drinks

One thought on “In the kitchen with Kerry & Andy: vegetarian stuffing stuffed red onions”