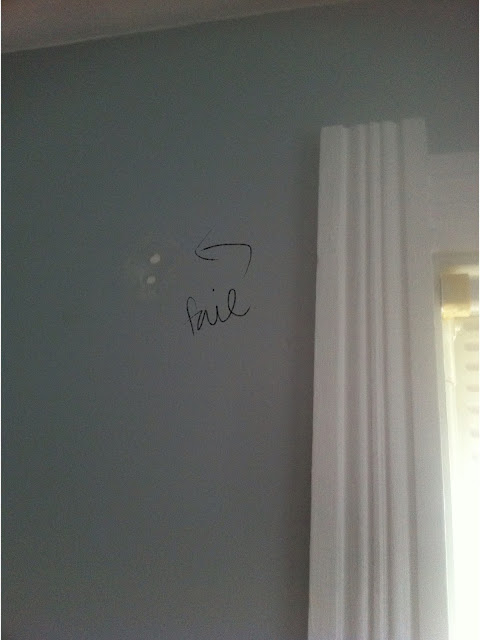 We decided to hang curtains in our bedroom this weekend. No big deal, right? It’ll take maybe an hour for four windows, right? Wrong. When you live in a house built in 1890, everything is a big deal. Two trips to the hardware store and at least three hours later… we admitted failure.

Our goal was to hang a double curtain rod (from Ikea) along with a pair of grey patterned curtains on the outside rod and a single yellow crinkle semi-sheer on the inside rod (all from West Elm).  We have white wood moulding around the four bedroom windows, which you can see in the photo above, so we decided to hang the curtains a little below the top moulding, just so we wouldn’t cover it up completely.  It would look something like this (don’t judge my terrible drawing!): 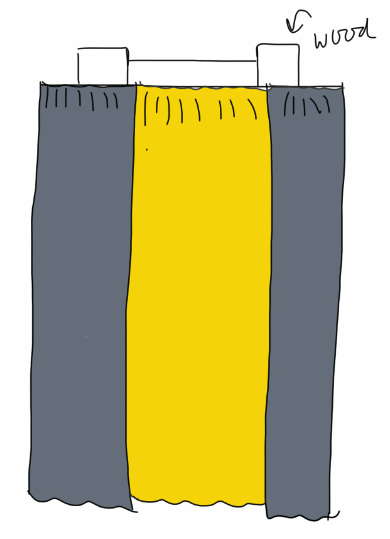 Before drilling anything, we did some research on what would be the best screws and anchors to use on  old plaster walls. Because these walls can crumble really easily, using screws alone runs the risk of the screw pulling out several inches of wall leaving a giant, horrible hole in the wall and your curtains crashing to the floor. That would be very bad. Our curtains are all fairly lightweight and the Ikea curtain rods are just plastic, but we still wanted to be sure that they’d be secure on the walls. We did some Internet research and also talked to a guy at the hardware store, and everyone suggested using anchors, which basically lock the screws to the wall. We settled on some anchors called pop toggles, little plastic wings that open up inside the wall, can hold up to 40 pounds, and look like this (photo from here): 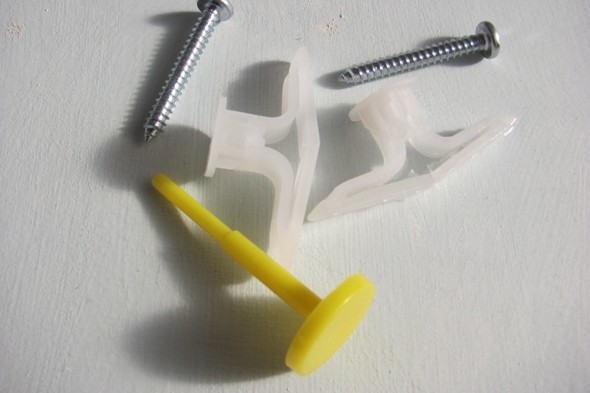 Except, when we tried these on our walls it didn’t work at all. It seems that these are made to be used on walls that are about half an inch thick, but our walls are a couple of inches thick. The little wings have nowhere to go, so when Andy would insert the screw into the plastic wing, the whole thing would just spin and spin, instead of tightening up. Failure.
Back to the hardware store.
We picked up another kind of anchor, and honestly at this point I was so frustrated and hot and tired and grumpy, I have no idea what kind of anchor we got, but I was still confident it would work. Um. Nope. It was the exact same result: failure.
I packed up the curtains, packed up the curtain rods and held back the tears while daydreaming about moving to a new house with drywall, while Andy patched the holes he’d drilled. Failure.
Maybe we’ll eventually find an anchor that will work on our walls. Maybe we’ll need to drill directly into the wood moulding, which I really don’t want to do. Maybe we’ll need to give up on the double curtains and use an extension rod like I’ve done in all of the other rooms where I didn’t want to damage the walls/wood.  Ugh, is there even a solution that I can be happy with?
For now, I’m stuck with the mini blinds that came with the house. There is nothing I hate more than mini blinds. I seriously hate them. They’re ugly and noisy and dirty and cheap. And now I’m stuck with them.  At least until we come up with another idea. Ugh. Fail fail fail. Sometimes the simplest home renovation problems end up being the most difficult.
By Kerry | Filed under Design & Inspiration, Old House | Tags: old bedroom