I am a self proclaimed pizza snob. It’s true. Like most college students, my daily caloric intake was mainly pizza. Luckily for me, I was going to school in the Bronx. So over four very formative food years, I stuffed my face with what could arguably be the best pizza on the planet. New York pizza is different than pizza anywhere else, and I love it.

When I moved back to Cleveland after school, I was devastated by the lack of quality pizza choices around here. I remember settling for Papa John’s for a while, but then I boycotted them when that one franchise in DC made those LeBron James “Crybaby” shirts with the Papa John’s logo all over them. In retrospect, I love that shirt. Anyway, good pizza is hard to find in Cleveland.

That’s why I’m really excited to kick off what Kerry and I have dubbed “Pizza World Tour 2012.” Yesterday was day 1, where we had lunch at Vincenza’s Pizza and Pasta downtown. This is Cleveland’s saving grace of the pizza scene. They have different styles: from the doughy Cleveland style, to Chicago deep dish, and my favorite, the New York thin crust. This is the closest thing I’ve found in Cleveland to New York style pizza and it’s borderline perfect. If you ever are downtown for lunch, I highly recommend it. Just don’t try going for dinner. They close at 6pm and aren’t open on weekends. 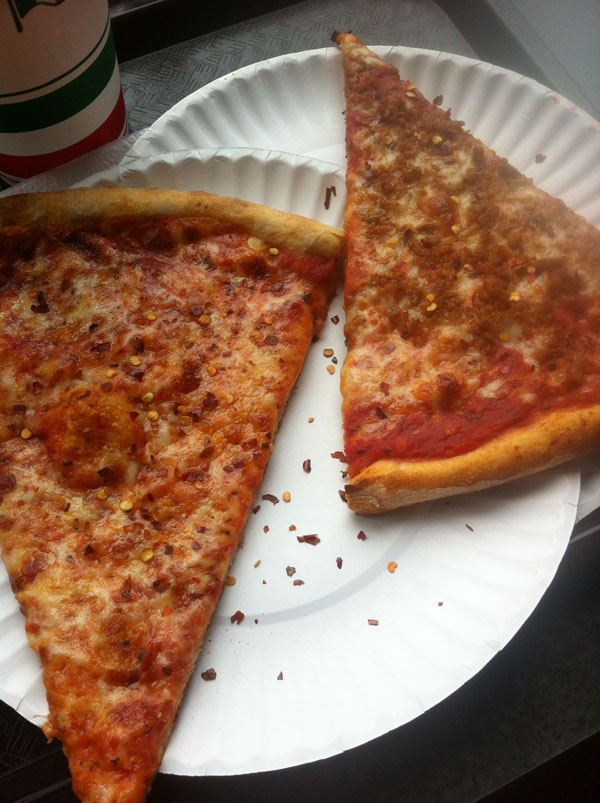 Today, day 2 of Pizza World Tour 2012, we’re off to New York for a wedding. We’ll be there all weekend, which means lots of amazing pizza. And then, as you know, we’re off to Italy to sample some of the real stuff. Be sure to follow both Kerry and me on Instagram for pictures of our tour. You can also follow the hashtag #PizzaWorldTour2012, which apparently we made up.